I know most of you readers are envious of my big black truck and are puzzled as to why you didn’t make the brave buying decisions I make, but let me tell you that having 2 tonne of British awesomeness isn’t without its problems. For a start, it’s a British car and that means design by committee with a union watching over things to make sure sensible decisions don’t go ahead. I won’t bore you with a description of the air-conditioning unit that seems to have had three different teams working on it without a plan or the headlights that actually make things darker when switched on. Nor will I dilate on the inferno that blasts up from the gearbox, scorching the ‘hand’ brake that nuzzles your left shin at all times. Rather, I will explain how I solved the problem of single-handedly putting a 26kg kayak onto the six foot 6 inch roof.

I went without racks for a long time due to illness first then loss of income next but a small windfall and the onset of Spring prompted action. But what to do? There are several solutions and few of them really work on a vehicle of this height. Here’s my methodology:

1. Put on a set of normal racks like Rhino, Thule or Pro-Rack and then mount my existing kayak cradles on them. This necessitates aero bars. Easy start but then there’s the problem of getting the boat way up there.

2. Get a Hullavator. Good call and this means it will bring the boat down to chest height. Problem is the cost of $719. This plus the racks is an $1100 solution. There’s also the problem of having to push in the side mirror every time I use the kayak. This mirror is the bane of my driving life and took ages to adjust properly. Now that it is, I don’t want to disturb it.

3. Get a roof-top cage and make a set of kayak cradles. Then fashion some sort of boat roller at the back to slide the boat up. This would have the advantage of giving me a rack system that is much more versatile for general 4wd trips. Problem is that these tradesman racks are around $700 or more and then there’s the problem of me manufacturing stuff. Not a brilliant plan.

4. Just go with option 1 and only go out with two people. Poor plan. I paddle a lot with Owen Walton who is somewhere between 4 foot and 51/2 foot tall, maybe a bit more. I am 6’1″ and struggle to reach the top of the truck. Bad plan.

Then Rhino come to the rescue with this thing:
http://www.rhinorack.com.au/AccSubCategory_Kayak-Loaders_Page_1_Accessory_Rhino-Universal-Side-Loader_609_78.aspx

Basically it’s a metal stick that clips onto the roof rack and allows you to lift the prow of the boat up so you can swing the stern to the cradles. I’ll show you: 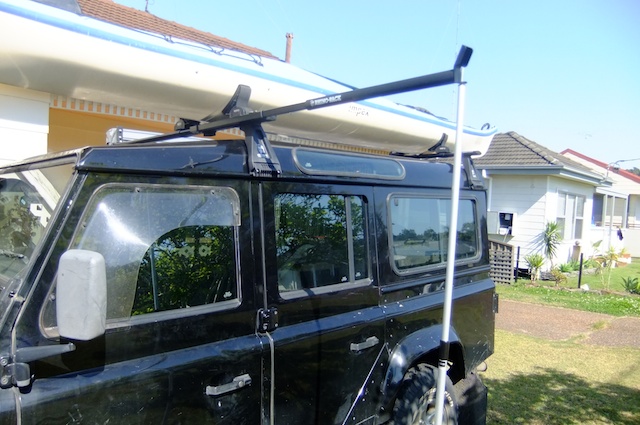 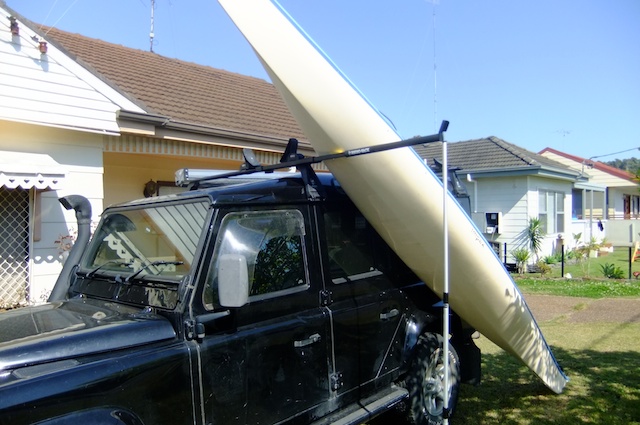 Pretty neat, huh? At first I thought the bar would be a bit flimsy but once load is applied to it, it held firm. I can actually hang from it and I weigh 100kg. I don’t think I’ll be doing that too many times but the bar by itself can be used to hang a camp light or a solar shower so it is quite versatile. The whole setup cost me $500 and now I am sorted.

The next upgrade isn’t directly kayak related but fits the lifestyle. Most serious 4wds have a side awning attached. I know you can do all this with a tarp and I have a good tarp but for sheer convenience you can’t beat a pull out awning. So I got one while it was on special. There are lots to choose from and I guess they’re all good but I got the Tigerz11 for two reasons. First, it was on special for under $200 and second it is 2m x 3m making it one of the biggest out there. It’s as good as the Rhino or ARB versions and dead easy to set up. See: 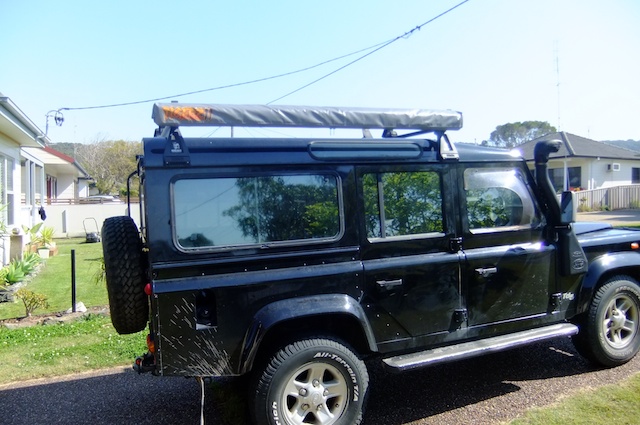 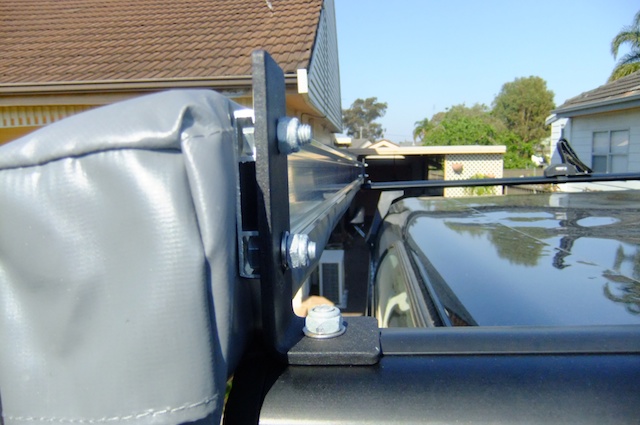 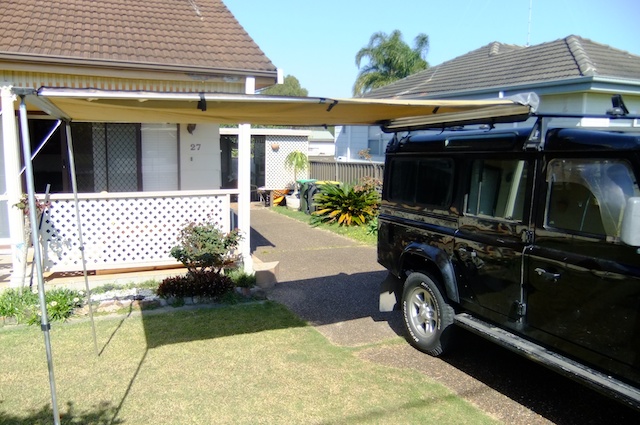 You can get side screens for this awning as well so it’s a pretty handy overnight setup with a swag or two or for just a day on the beach.
My truck grows in awesomeness with each upgrade. I can tell you are all now staring at your current rides with some measure of disgust wondering where you went wrong. I went for a paddle with Owen last week and he picked me up in his Triton. I was appalled at the level of opulence and asked him if he was getting a bit soft in his old age. With no income and the prospect of becoming homeless shortly, at least I will have a decent emergency home and I’ve been told the Defender TD5 will run on used vegetable oil from takeaway deep friers. With a MacDonalds in every town, I should be able to roam the country for ever.